Reviled by many, vultures are often associated with death, and their appearance and unappealing table manners result in their conservation status struggling to arouse sympathy. However, vultures are crucial to the ecosystem. Supplementary feeding at a vulture restaurant is one of the conservation initiatives helping to support declining vulture numbers and educate people on the status and importance of these fascinating birds.

Vulture Restaurant: A Dining Experience with a Difference

The sky is hazy, and the day is heating up. Circling vultures and marabou storks have begun to gather. More birds start to arrive as time passes, circling lower and closer to the area, soon to provide them with a daily reward. Finally, as 1 pm approaches, hooded and white-backed vultures land in the trees close by where they can get a good vantage point to observe the preparations.

They watch eagerly as the presenter Moses arrives and begins to hose down the area to reduce dust and provide water. Arriving tourists signal that the feast is getting closer, and birds move in, jostling and squabbling for a good seat at the buffet, a preview of the table manners the waiting tourists are about to witness. The birds are about to have lunch at the vulture restaurant at the Victoria Falls Safari Lodge. 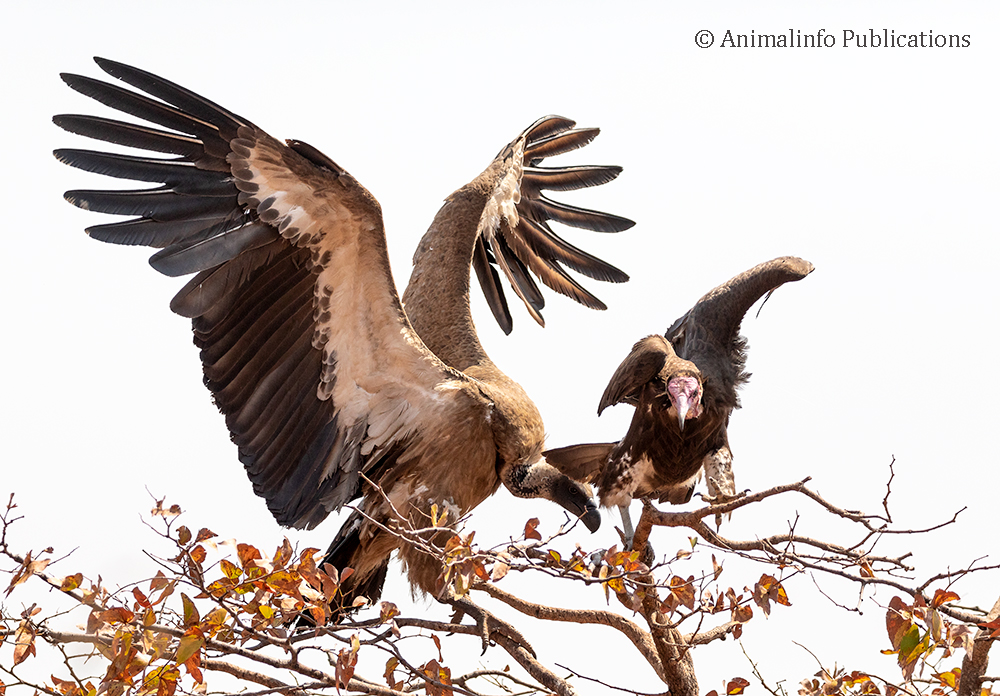 White-backed (left) and hooded vultures landing in the trees near the vulture restaurant site.

Dinner Guests at the Vulture Restaurant

Although the vultures are regular guests, it is evident that the birds remain very fearful of humans. Despite their eagerness, the nervous vultures wait while Moses explains the plight of these endangered birds, the threats to their existence, and the consequences of losing these essential creatures. Vultures are responsible for disposing of 70% of the carrion in Africa, keeping the environment clean and recycling nutrients. At last, Moses opens the bags of meat scraps, bones, and a sizable frozen ball of meat trimmings from the hotel kitchen. Still, they hold back until he has moved away to a safe distance.

As he clears the feeding ground, the birds descend in a feeding frenzy that is a sight to behold. Tearing at the ball of meat and swallowing down strips of flesh torn from the bones, fighting among themselves for the best position, the food disappears quickly. As a vulture meal goes, the feeding behaviour at the vulture restaurant is far less gruesome than at a normal kill, where birds can be shoulder deep in bloody carcasses. It is not hard to understand why vultures are considered greedy and disgusting. 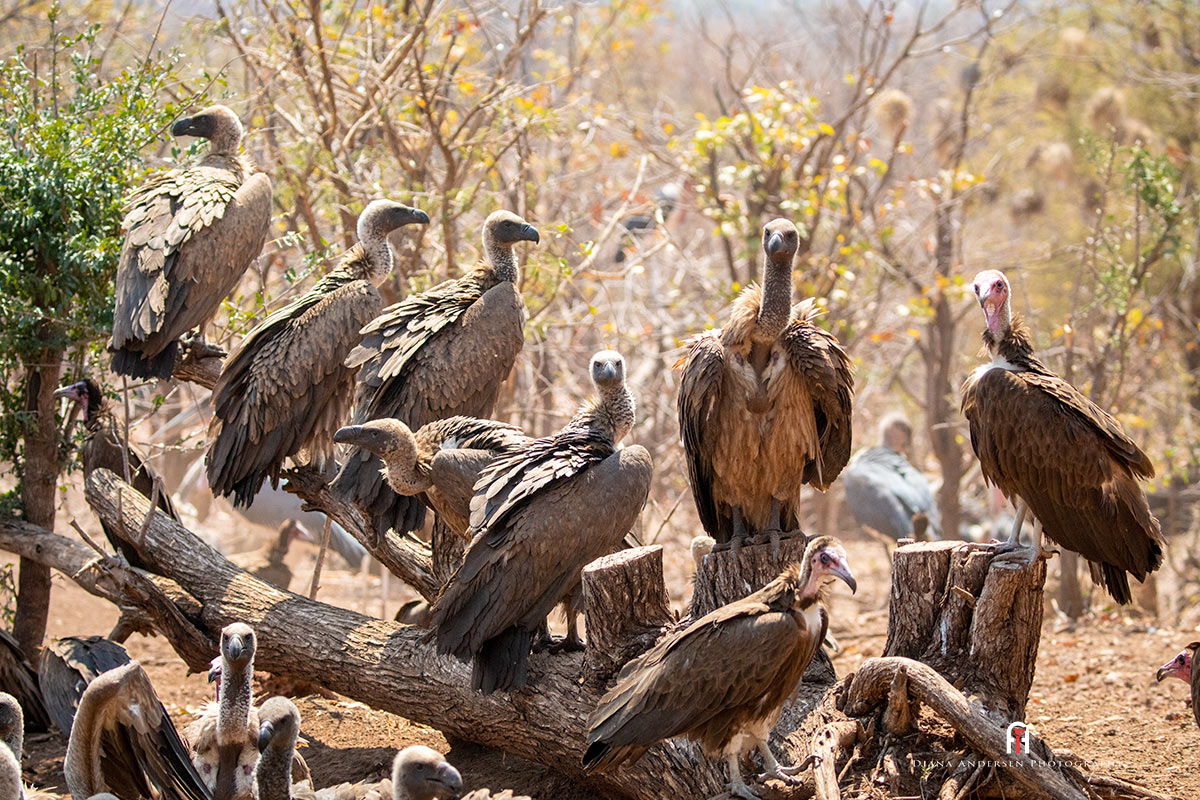 Vultures waiting for food at the vulture restaurant experience.

Feeding is over, and stragglers pick at the little that remains. Many birds are hot due to the frenzied activity in the midday sun. The bare heads of the hooded vultures that were pinkish white when they arrived are now bright pink, an effect of heat and agitation, and the birds begin to drink to wash down the food and cool themselves, ever mindful of the proximity of the tourists. Moses continues to talk about the birds and encourages visitors to spread awareness of the rapid decline of vulture species. It is evident that he is passionate about these birds.

The Status of African Vulture Species

Vulture numbers are plummeting, with seven of the eleven African species facing extinction. Hooded, white-backed, Rüppell’s, and white-headed vultures are critically endangered. Lappet-faced, Cape and Egyptian are classified as endangered, cinereous, and bearded as near threatened. This status leaves only the griffon and palm-nut vultures in the least concern category.

Threats to their survival include loss of habitat and conflict with expanding human populations, including diminished food sources and loss of nesting sites. Deaths occur from collisions with power lines and poisoning from feeding on the carcasses of farm animals treated with diclofenac. This anti-inflammatory medication is toxic to vultures. Subsistence farmers also use poison baits to kill predators that attack their livestock. Vultures feeding on the baited animals or the deceased predators also fall victim. In some cultures, they are mistakenly perceived as pests and are persecuted and killed for no other reason.

Poachers have also targeted vultures to help them evade detection. Rangers use the circling behaviour of the birds when they detect deceased animals to alert them to the activities of poachers. In addition, carcasses laced with poison kill large numbers of vultures. In 2019, 537 vultures died in Botswana after feeding on elephant carcasses poisoned by poachers. The casualties included 468 critically endangered white-backed vultures. This number was the total of deceased birds collected at the site, but the estimated loss was probably closer to 1500 birds. Many young birds were also likely to have died due to the death of parent birds.

Poachers also target the birds for bushmeat and body parts. Traditional healers believe that different vulture body parts can cure disease and provide foresight through dreams. Some believe that sleeping with the head of a vulture placed under the pillow will allow you to see into the future, making them a desired object for gamblers. Raising awareness of the illegal trade in body parts and bushmeat is one of the aims of the vulture presentation. 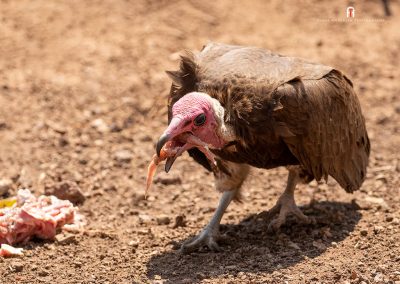 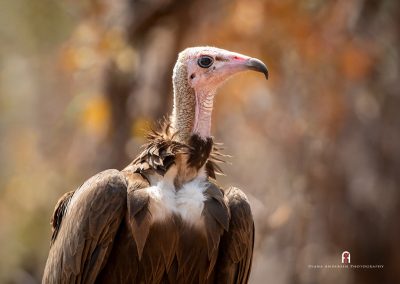 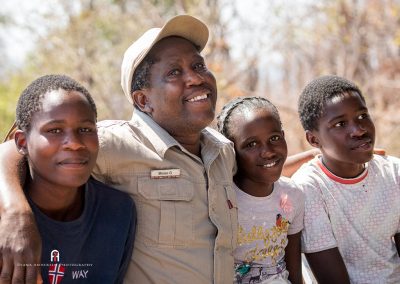 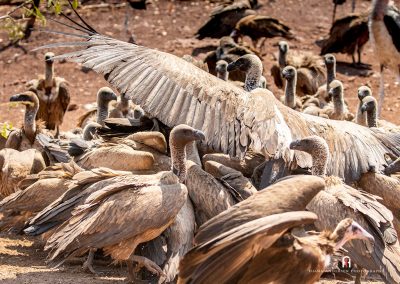 The Role of the Vulture Restaurant

Tourism is one of the best ways to educate people on conservation issues. The ‘Vulture Culture Experience’ at the lodge is not just a show to entertain tourists. It provides an opportunity for visitors to see the feeding habits of these birds and understand their importance to the African ecosystem.

By disposing of the carcasses of diseased animals, vultures are crucial to preventing the spread of diseases such as anthrax, cholera, and rabies. They are immune to these and other conditions. In addition, their highly acidic digestive system can digest rotting and diseased flesh with no ill effects. The practice also provides safe supplementary feeding zones for vultures; assisting in their survival through feeding is never offered at a rate that results in dependence.

Critically endangered white-backed and hooded vultures are regular visitors to the restaurant at Victoria Falls Safari Lodge. Other visitors include yellow-billed kites, marabou storks and tawny eagles. The vulture feed is a joint venture between the Victoria Falls Wildlife Trust and the lodge. Together they also monitor vulture numbers and nest sites and participate in the fitting of satellite tracking devices to track the spatial movements of the birds. Occasionally, tagged vultures visit the restaurant providing valuable information passed on to Vulpro (Vulture Protection in South Africa). 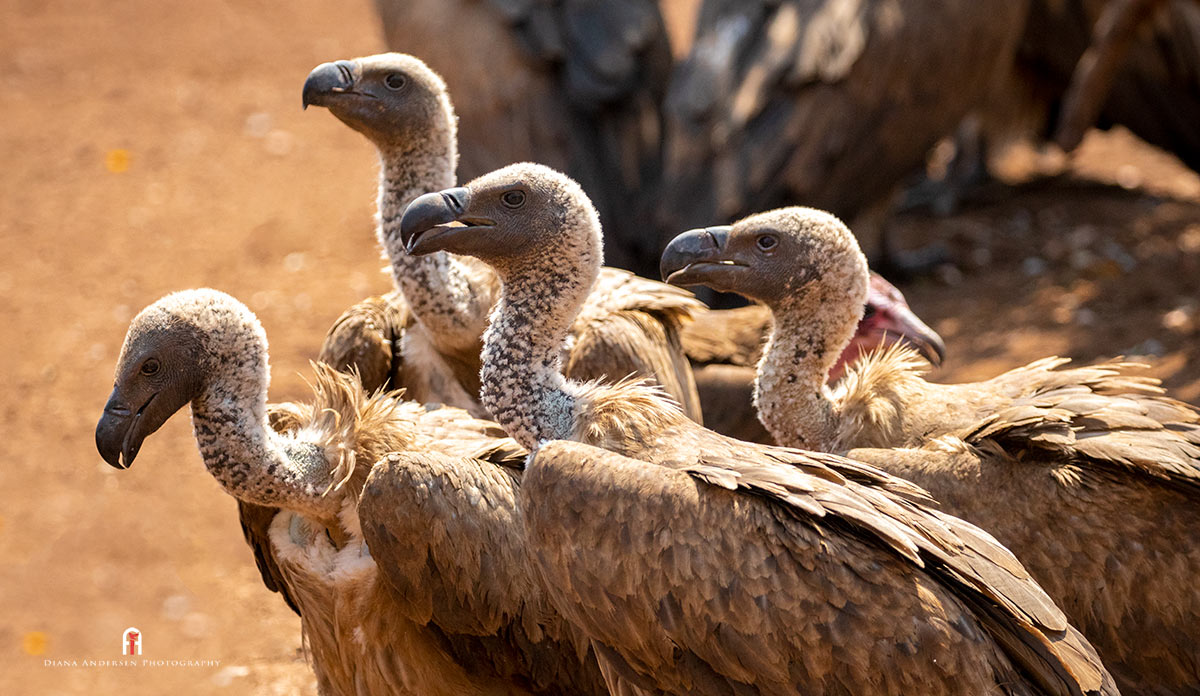 Through the vulture feeding experience at the lodge, visitors are encouraged to spread awareness of the vulture crisis in Africa. Lobbying for banning the toxic pesticides Furadan and aldicarb and actively promoting the use of ‘green’ medications in livestock will also help.

Of course, conservation organizations also require financial support. A donation to these conservation projects is always appreciated. Visiting the ‘Vulture Culture Experience’ is a great experience, and it’s free, so a donation is little to ask. Without vultures, the spread of disease to other animals, and potentially humans, could result in the loss of many species like lions, elephants and painted dogs. Supporting the projects that aim to preserve these ecosystem guardians makes perfect sense.

Cockatoos in Australia, also referred to as 'cockies' consist of several species. What type of bird species is an Australian cockatoo?

Ethical wildlife tourism can benefit the conservation of some species by providing funding and education on the threats facing wildlife.
Read More 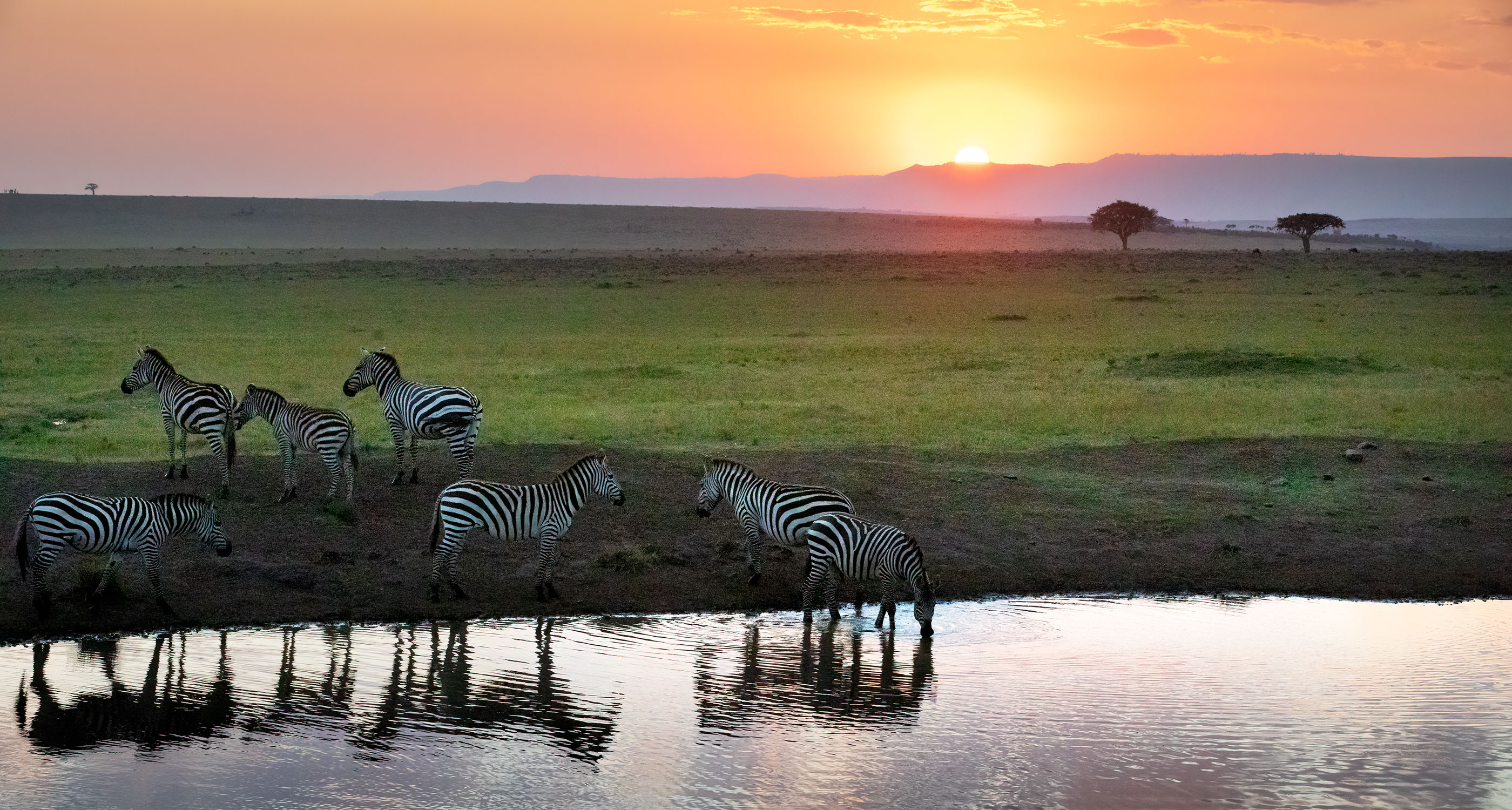 African wildlife viewed from inside the Siduli Hide at Victoria Falls, Zimbabwe. Close encounters with elephants and other African game. 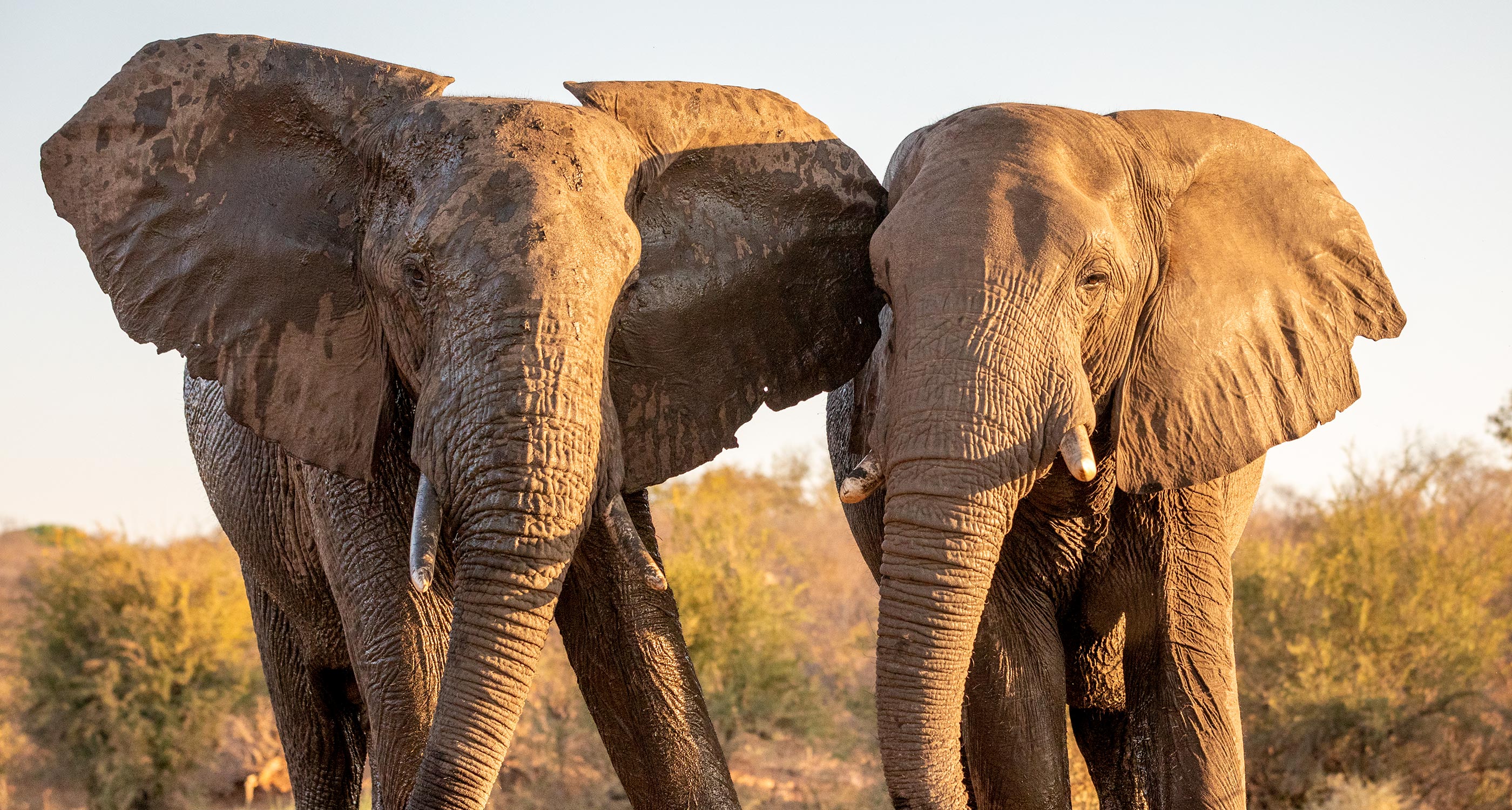 Flamingos at Lake Nakuru in Kenya are a highlight of any wildlife tour in Africa. Greater and lesser flamingos in the wild is a must see.